Here's an interview with me that was published in the Cartoon Art Professional Society's Newsletter a couple of months ago.

1. Where are you from, and where do you live/work now?
I am originally from Sacramento, CA, and after a stint working as an animator in Marin County, moved to Los Angeles to pursue freelance illustration in 2002. I work primarily from my home.

2. Do you have a spouse and kids? Their names?
No spouse, no kids. 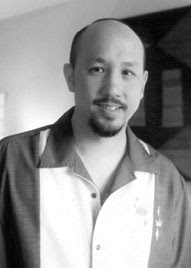 3. How long have you been a CAPS member?
I think I joined a little bit after I moved to LA. Since 2003 probably.

4. Please list some highlights from your resume.
-"What's Your Claim to Fame?" published in National Lampoon.

-Animator at LucasArts on "Full Throttle", "The Curse of Monkey Island" and "Herc's Adventures" among others. 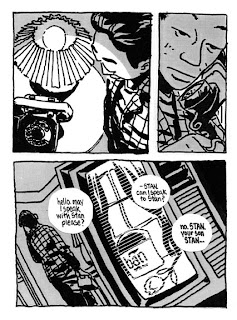 -Storyboards for film and TV including Sky Captain and the World of Tomorrow, TMNT, Anacondas: Hunt for the Blood Orchid, "Growing Up Creepie" and "Wolverine and the X-Men". 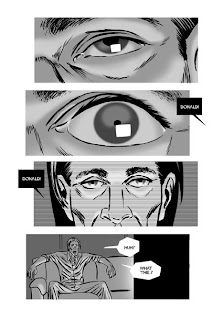 -Contributed to "Babes in Space" anthology with "Fly Me to the Moon", featuring my character, Nora Drenalin: Teen Space Ranger

-Interviewed in "24 Hours Later" a documentary about 24-hour comics.

5. When did you know you wanted to be a cartoonist/writer?
I wrote and drew my own comics and cartoons ever since I was a kid. It's always been a part of my life.

6. Did you go to school for art/writing? Where?
I graduated from Chico State with a major in illustration and a minor in art history. I continue to take classes occasionally at places like the L.A. Academy of Figurative Art.

7. Who was the first cartoonist/writer you ever met?
Probably Steve Leialoha, at a comic convention in Sacramento in the 70's.

8.What artists/writers of all time influenced you in your formative years?
I had access to a lot of old Silver Age and early 70's comics from a very early age and had a lot of influences come and go. Some of the most memorable and influential included Jim Aparo's Phantom Stranger and Paul Gulacy's Shang-Chi, Master of Kung Fu. I think what appealed to me most about those comics were their cinematic sense of atmosphere and storytelling. Aparo frequently used Dutched angles and often threw characters into full or partial silhouette. Gulacy would slow down time by breaking an action down into small parts, often focusing on inserts or peripheral information (following a beer bottle as it rolls across the floor, for example). My very favorite comics, however, were the short horror story anthologies like The Unexpected, Creepie, Eerie, House of Secrets, etc. I appreciated how much story they were able to pack into just a few pages. I felt the same way about Mad magazine, which I read a lot. I usually didn't follow serialized comics over a long period of time; I had no patience for that...I liked complete, self-contained stories. In college I had a weekly comic strip in the campus paper, which was a blatant Jules Feiffer rip off.

10. What was the first cartooning/writing gig for which you were paid?
I was hired as an intern illustrator / graphic designer at The Modesto Bee out of college.

11. What was your first big break and who gave it to you?
Sam Gross bought a cartoon I did called "What's Your Claim to Fame?" which appeared in National Lampoon in 1989. A few years later Gary Winick hired me to work at LucasArts as an animator, where I stayed for 9 years. The Xeric Foundation Grant for my comic book Saturday Nite helped my comics work reach a wider audience. As a storyboard artist, Kerry Conran's Sky Captain and the World of Tomorrow was my first substantial gig, lasting about eight months and subsequently opening a few doors.

12. What was the worst job you ever had (not necessarily in the cartooning field)?
I worked at a car wash in Sacramento one summer. People can be very picky and protective when it comes to their cars, and that would often create some tension. Plus, any outdoor job in Sacramento during the summer will be a sucky job.

13. Cartoonistically speaking, what was your favorite project/job?
I did a comic book a few years ago for the 24-hour Comics Challenge. It was a Twilight Zone type of story called "VICE" about magic fortune cookies. What I liked most was how the story, even though I had no idea where it was going when I started, fell together perfectly (with all it's thematic complexities and twist ending) in less than 24 hours. I didn't actually finish the artwork within the 24-hour timeframe, but I felt it deserved to be finished, so I gave it a second 24 (nonconsecutive) hours to finish the inking and lettering. I self published it as a minicomic and it got 9 out of 10 stars from Sequential Tart! It also sold well at APE and Comic-Con. 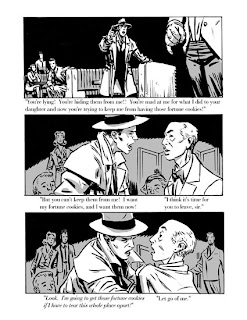 14. What is your medium of choice?
Pencil and paper. I also like to add tone or color in the computer.

15. Specific tools you like to use (type/brand of paper, specific brushes, paint, ink, etc.)?
Col-erase Indigo Blue pencil on white bond paper. Regular black graphite pencils smear too much for my taste. When I ink, I use a Sharpie, or sometimes a Pigma brush pen. I generally do color in Photoshop.

16. What are your work habits/routine?
Actually, I'm kind of an artistic chameleon when it comes to my comics; I experiment a lot. I work in the manner that the particular comic story is asking me to work. Look at my comics over the years and it looks like I have multiple personalities; each project different from the other, but internally consistent.

17. What is your philosophy regarding your work - for instance, what are you trying to achieve?
As an artist, I just try to do the type of work I would enjoy as an audience.

18. What is the greatest lesson you have learned in your profession?
The work will be easier, and the final product better if you can make the work fun for yourself.

19. If something could be invented to make your job easier, what would it be?
On my computer, a "fix" button.

20. Any interesting people you've worked with?
My first full-time art job was at LucasArts, and I was floored to find Ken Macklin (Dr. Watchstop), and Brent Anderson (Astro City) working there; its a shock when someone who you were a geeky fan of as a kid is suddenly one of your professional peers.

21. Any side interests? "When I'm not drawing/writing, I like to...
I've been trying to learn to play piano and oil paint. I cuddle my DVD collection daily.

22. If you have any fans, what is your best fan story?
No specific stories, and its been a while since I've gotten fan mail for my comics, but it was neat to get fan mail from places as far away as Glasgow, or Paris. People have also sent me stuff like their own comics work and drawings, which was fun. I get the occasional email from people wanting advice on storyboarding as a career. Actually, after working on some LucasArts games, I have gotten a couple of strange emails and phone calls from Star Wars fans who somehow tracked me down at home thinking I could answer their game tech support question or somehow give them some inside information about the Sarlacc in Return of the Jedi.

23. What are you working on right now?
I'm not working on anything at the moment, which is a good opportunity to revisit the multitudes of personal projects I've put on the back burner. I've also been working on a couple of screenplays, since that's something I've always wanted to do. If nobody wants to buy my screenplays, they'll probably end up as comic books instead. I'm also trying to learn an animation/paint program called Bauhaus Mirage and a 3D animation program called Animation: Master. I have an idea for a themed sketchbook project which I hope to have done for Comic-Con next year.

24. What is your dream project to work on?
What I really want to work on is just something that I can feel proud to have worked on; where the creator clearly personally cares about the work and isn't bending his vision to appeal to a certain demographic to sell the maximum number of units. That said, I really like old film noir movies and old sci-fi and horror movies like Metropolis, Things to Come, T-Men, I Married a Monster from Outer Space, The Brain That Wouldn't Die. I wouldn't mind doing something that embraces some kind of retro aesthetic.

25. Any additional tales to tell regarding your career?
Once upon a time there was a cartoonist who created three websites. Their names were
http://www.satnitesite.8k.com, http://ansonart.tripod.com and http://www.badjoojoo.8m.com. They chased down Goldilocks, ate her up, and they all lived happily ever after. The End.
Posted by Anson Jew at 2:46 PM

Hey Anson!
Been meaning to catch up on what you've been up to since running into you and your brother at the SDCC a couple of years back-

Great interview--- and glad that both of you kept going with art and have had it pay off! :)

Congrats and looking forward to seeing your personal projects get off the ground, too!

You might enjoy this Mr. Media podcast interview with cartoonist Jules Feiffer, who talks about the new collection of his comic strips from the Village Voice, getting his start with Will Eisner on The Spirit, his plays (Little Murders), his movies (Carnal Knowledge, Popeye), the Disney musical adaptation of The Man in the Ceiling, and his forthcoming memoirs.