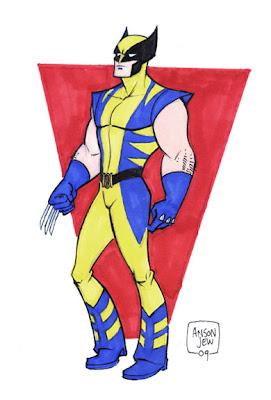 Well, "X-Men Origins: Wolverine" is out and doing strong box office. And on the Nicktoons network, the new X-Men cartoon series, "Wolverine and the X-Men" is well under way. I happened to storyboard on an episode of that series, the one premiering this Friday, called "Code of Conduct". My scenes are basically a warehouse fight involving Wolverine, Rogue, and a bunch of ninjas, with an appearance by the Silver Samurai. The scene required a lot of martial arts and swordplay, so I really had to bone up with a lot of research of old ninja movies, anime (particularly Samurai Champloo), some of my favorite Bruce Lee and Jackie Chan movies, and Kill Bill. From what I understand, this episode was banned in the UK (the entire first season has already had it's run overseas) for it's use of swordplay.

Here's a taste of the episode with a few samples of my storyboards on my Flickr site.

EDIT: I got the airdate based on the episode number (17) and the episodes already aired. When I wrote this, I was unaware that the show had taken a two month hiatus. The episode will air at a later date.
Posted by Anson Jew at 3:19 PM 3 comments: