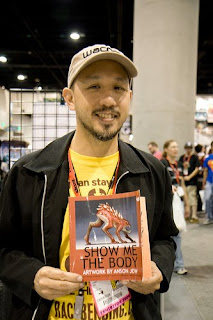 Well, I've finally managed to get a little free time to blog following the craziness that is the San Diego Comic Con! It turned out to be a fruitful convention, with me making some great new connections (leading directly to some new freelance work beginning mere days after the convention!) as well as catching up with some fellow geeks I haven't seen in a while. A few of those said geeks can be seen on Parkablogs, the blog of Teoh Yi Chie, who took the above photo. There is great coverage of Comic-Con as well as great reviews of art related stuff!

My new book "Show Me the Body" sold well for me, and if you weren't at Comic-Con, you can still order it through Stuart Ng Books, who any true connoisseur of illustration know is THE one stop place to shop for quality, hard to find books featuring eye-popping illustration. You can also order it through Amazon.com
or through my CreateSpace e-store.

I'm not used to doing a lot of public speaking, so I was a little nervous on Sunday morning when I did a little talk on storyboarding and illustration. But things turned out fine as I showed some of my storyboards from past jobs and the resulting footage. I also showed some of my animation from my LucasArts days and answered questions from the audience. Things went fairly smoothly and I was relieved when I was told it was well-received.

Although the start of the convention was disappointingly slow saleswise, it picked up considerably on the weekend. Vice, a reliable top seller within my oeuvre sold pretty well. The big surprise was the popularity of my original animal sketches, many of which I have posted on this blog, like here and here and here and here and here.

Keep your eyes peeled for news on buying your own animal sketch online in the future.
I'm sure an animal sketchbook won't be a long way off either.

By the way, if you like my animal art, you'll love it on a canvas bag or on a mug or shirt! Check out Anson's Artzoo!
Posted by Anson Jew at 10:35 AM 5 comments: