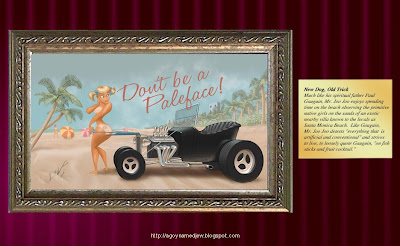 In celebration of the opening of Garter Belts and Gasoline 3, I've done a bit of an update to my long neglected pinup site, "The Bad Joo Joo Gallery". I've added a few pieces and there will be more on the way. I had actually planned to do a lot more, like deal with some JavaScript problems that appear on some browsers as well as a page for ordering original art and prints, but I've had a lot on my plate lately, and probably won't get to any of that before the show. But check out the site anyways; art's good for ya.

Here's the press info on Garter Belts and Gasoline 3:

What: Artist Reception for show entitled Garter Belts & Gasoline 3 and Car show
Where: The Gallery at the Alternative Cafe. 1230 Fremont Blvd, Seaside
When: Friday, August 13th 7pm till 10pm
Why: Because you like art and hotrods, especially on the same night!
Who:
Joe Chiodo
Sam Gambino
April May
Glen McDowell
Randy Noborikawa
Robh Ruppel
Tanem
Jessica "Tink" Whiteside
Anson Jew
and more...

Grease up your hair, slide on your best garter and role on down to The Alternative Cafe on Friday the 13th! Garter Belts & Gasoline is our 3rd annual pin-up and hotrod art exhibit here at the Gallery at the Alternative Cafe,
guest curated by local pin-up artist Tanem.

Hotrods, gassers and ratrods will be on display in front of the gallery from 6 to 9.

Themed drink specials during the car show. Wine and snacks, as always, will be available. Guest disc jockey.

Joe Chiodo:
Born on January 22, 1958 (yep you do the math), the youngest of four boys and raised in San Jose CA. Joe has always been a pretty quiet individual, finding art to be his passion at an early age. Trying to find an outlet and realizing San Jose would not be the place where this would happen, he traveled to various places like, New York and Los Angeles. Where he worked for a diverse client base, from book covers, toy companies, gaming, and comics, eventually settling in San Diego.
Sam Gambino:
Sam grew up with kustom kulture art as the son of an original 1956 Detroit, Michigan pinstriper. He has a great love and appreciation for vintage ad art; so much so that much of his art is sometimes mistaken to be 40 or 50 years old. He has created comic panels for King Features Syndicate's New Breed comic strip and shown his work in gallery art shows inside and 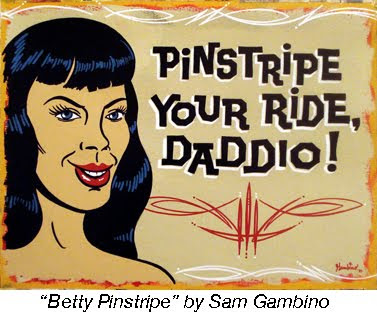 outside of the United States. Working primarily in enamels, he also uses 23 carat gold leaf in much of his art. In addition, he creates digital and pen and ink art. His subject matter many times includes campy, vintage and kitschy cult characters - usually with a different spin than one would expect to see with these personalities. He designed the Sam's Shrunken Head and Sam's Dinky Noggin mugs by Tiki Farm; the 2007 tiki mug for the legendary Sam's Seafood Restaurant in Huntington Beach, California; and Mort, Maury and Merv - the Bowling Moai Brothers mugs and decanter by Tiki Farm. There is also a line of his vintage style tin and wooden pub signs which are sold in stores worldwide.
April May:
Hot rodding is an art form, and she's proving it, one photo at a time. April May has been photographing cars since long before she could even "legally" drive to a car show. In every picture she takes, she is attempting to show how the owner's creativity, focus, and dedication came together to produce something meaningful. There's no need to have some broad laying on the car to take away from it's details and individuality. They speak for themselves.
Glen McDowell:
Northern California photographer located on the central coast offering wedding, portrait and pin-up photography as well as advertising and commercial photography. To learn more about me and the quality of my work please visit mcdowellphoto.com.
Randy Noborikawa:
Born in Southern California, graduated from Academy of Art College in San Francisco. Randy currently lives in Costa Mesa, Ca while frequently making trips to SF for inspiration. His work often takes on one of three distinct styles: linticular paintings, painterly cityscapes or the suger skull avatar.
Robh Ruppel:
Robh has designed for film, television and print. He attended Art Center College of Design and has worked for a varied clientele including Walt Disney Animation Studios, TV Guide, Boss Films, Naughty Dog and TSR.
“I love inventing worlds and the things in them. The thrill of seeing appear before you is pretty hard to match. In inventing things that don’t exist you’re part architect, part painter and part camerman. It never gets boring.”
While at Disney Robh art directed Brother Bear and Meet the Robinsons. He’s currently working on conceptualizing a next-gen games in Santa Monica, California.
Tanem:
Tanem started in the film industry as a storyboard artist for the award winning films Cherish and Dopamine. Having attended art school in San Francisco, he concentrated his studies on illustration for film. He later worked as a video game artist before transitioning into film making. Tanem recently completed his first film, New Brow. Tanem currently lives and works in Monterey.
Jessica "Tink" Whiteside:
My name is Jessica Whiteside, but I go by the nickname Tink. I started out my life in the bayou's of Louisiana. My father is a successful Visual Effects and Gaming Artist who taught me to draw when I was just a small fry. Very early on I developed a love for painting and drawing which has been an all consuming obsession ever since. My family moved to Australia when I was ten and returned to the United States when I was eighteen years old. After returning to the US with a quirky southern/ Australian combo sort of accent I decided to follow my father's footsteps to become a professional artist. I received a scholarship to attend The Academy of Art University in San Francisco where I learned the importance of good drawing, and graduated with a bachelor's degree in Illustration in 2004. I have exhibited my work in galleries around California since 2001 and also work as a Professional Freelance Illustrator, Graphic Designer and Event Producer.
Anson Jew:
Anson Jew began his career as an animator at LucasArts Entertainment, where his credits include the computer games "Full Throttle" and "Curse of Monkey Island". In 1999,he won a Xeric Foundation Grant and self-published the comic book "Saturday Nite". He currently works as a freelance storyboard artist. His feature film credits include "Sky Captain and the World of Tomorrow", "Prince Caspian" "TMNT" and "Anacondas: Hunt for the Blood Orchid". He has also worked on storyboards for commercials and the computer game industry, as well as concept art for corporate events and the toy industry. Anson has created work for companies including Acura, Nokia, Universal Music, Walgreens, Activision, Midway, The Learning Company, EA and Pacific Sun Wear. He lives in Los Angeles. 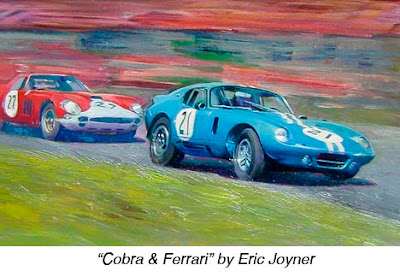 Last week Cartoon Network aired episode 4 of Scooby Doo! Mystery Inc., "Revenge of the Man Crab". I did some storyboards for that episode (this scene is in the middle of the episode). Here's a look: 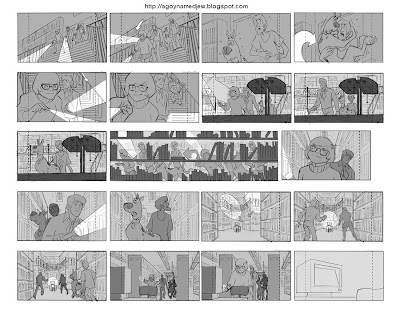 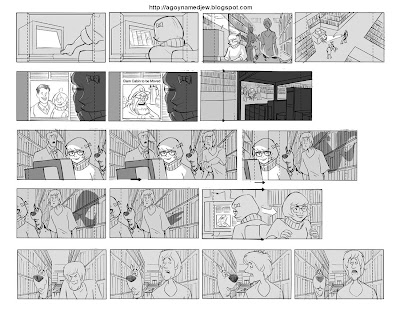