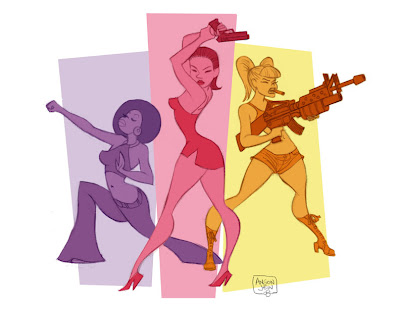 What a Difference a Day Makes (24 Little Hours) 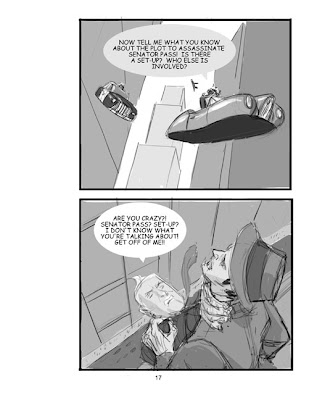 A few weeks ago, my brother Benton and I held a little 24 hour comics session at my place. For those who don't know, the 24 Hour Comics Challenge involves creating a 24-page comic in 24 consecutive hours. No scripts or preplanning, just plowing ahead with lots of coffee and take-out food. Personally, I'm not really one to like to jump ahead without a game-plan (at least in as much as story is concerned) so I had a back up card up my sleeve: the adaptation card--if something didn't start appearing storywise after a reasonable amount of pages had been done, I would push the story toward an adaptation of a story I already knew. 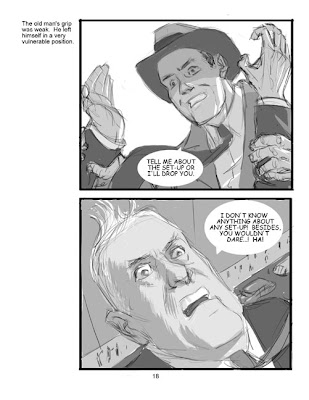 As it happened, the retro-future detective scenario I started was going nowhere, so I played the card and the story became a retro-future adaptation of Sophocles' Oedipus Rex--a sort of pseudo detective tale about fate with a twist ending that has been used a lot in cinema--from films like Angel Heart to Fight Club. While the finished story didn't have anywhere near the elegance or complexity of the original, and while subsequent looks at Oedipus Rex's plot summary showed that I was way off the mark in a lot of ways, I think I came up with a good, action packed story nonetheless. Here are a couple of pages from the comic, which will be made available in one form or another at the San Diego Comic-Con this year, where both my brother and I will have Artist Alley tables.
Posted by Anson Jew at 1:44 PM 2 comments: