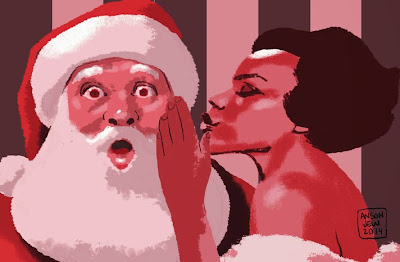 For this illustration, I was inspired by the Christmas song "Santa Baby", which was originally recorded in 1953 by Eartha Kitt (though the recording is often misattributed to Marilyn Monroe). The song was written by Joan Javits and Philip Springer, and was a sexy tongue-in-cheek novelty song in which a woman flirtatiously asks Santa for a host of extravagant gifts. The song was a big holiday hit in 1953 and was recorded again with new lyrics (as "This Year's Santa Baby") in 1954. A more uptempo version of the original was recorded by Kitt in 1963. It has been covered by artists such as Madonna, Mariah Carey, Macy Grey, The Pussycat Dolls, Taylor Swift and Miss Piggy.

I drew and painted the illustration digitally in Photoshop. The limited palette is an homage to the popular two or three-color printing process that was often used in publications in the early 20th Century.

All in one place!  See all my Storyboard to Screen comparison videos right here!
(Click on the bracket icon in the lower right hand corner of each video for the full screen view!)

Sky Captain and the World of Tomorrow:

On May 31 2014, I participated in a panel discussion about storyboarding for the Society of Illustrators of Los Angeles at the Victory Theater in Burbank.  Here's part 1 of the talk as captured by Santosh Oommen.
Posted by Anson Jew at 7:17 AM No comments:

Well San Diego Comic-Con 2014 has come and gone.  As always, it was a great chance to catch up with some old faces, and meet some new ones.  This year, as I've mentioned earlier in my blog (here and here), I submitted four pieces of artwork for inclusion in the Comic-Con Souvenir Book.  All four of them were accepted, and three of them were run full page!  I had presented abbreviated versions of the art on my blog to maintain the surprise, but now that the book is out, I now present the complete designs for your viewing pleasure (click the image to see it larger): 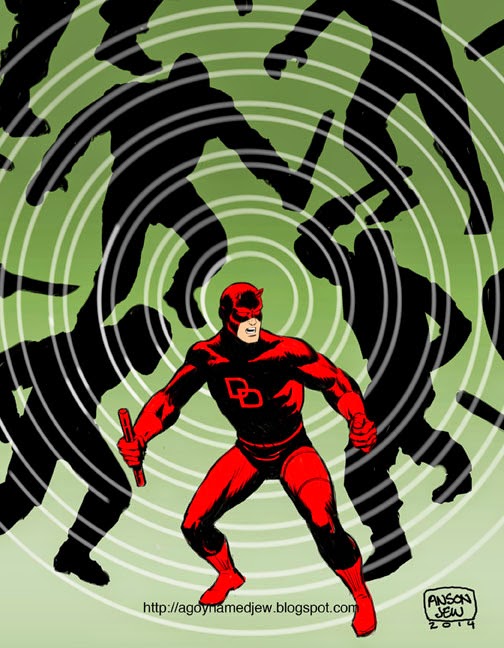 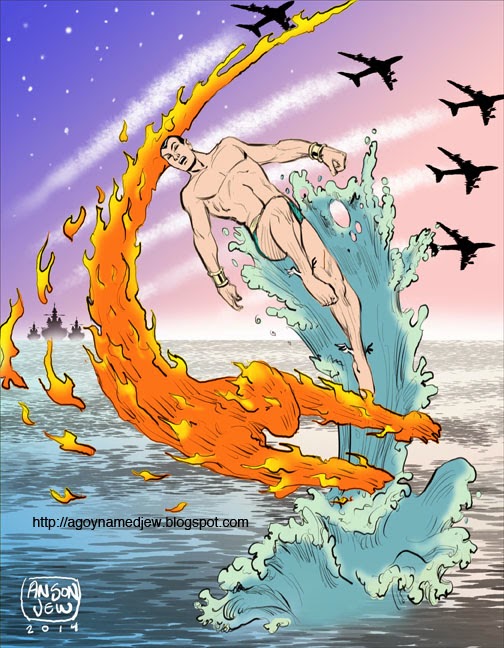 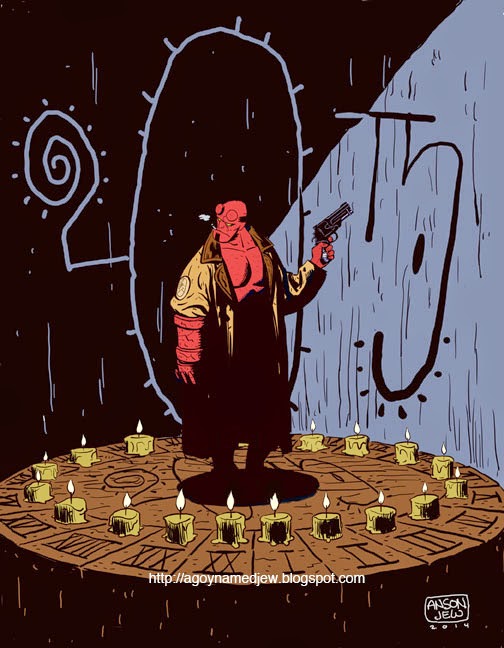 The fourth image was the Usagi Yojimbo poster I posted earlier on my blog.
Posted by Anson Jew at 4:56 PM No comments: 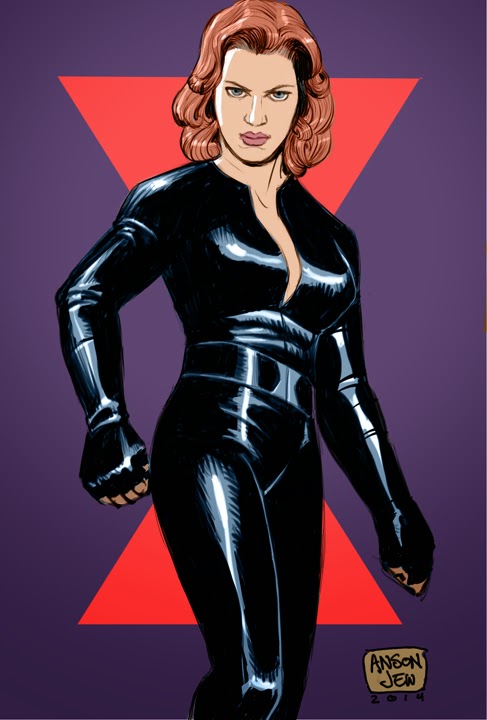 As I do every year, I will be tabling at Artists Alley at San Diego Comic-Con.  Stop by and visit me at my table DD24 (Artists Alley is close to Hall Entrance G and my table is usually close to an art school that specializes in anatomy).  I will have copies of my book, Professional Storyboarding: Rules of Thumb available, as well as several new prints -- Black Widow (pictured above), Daredevil, Human Torch and Submariner, and a digital painting of some robots.  I will also have a mini sketchbook of robot thumbnail sketches (pictured below). 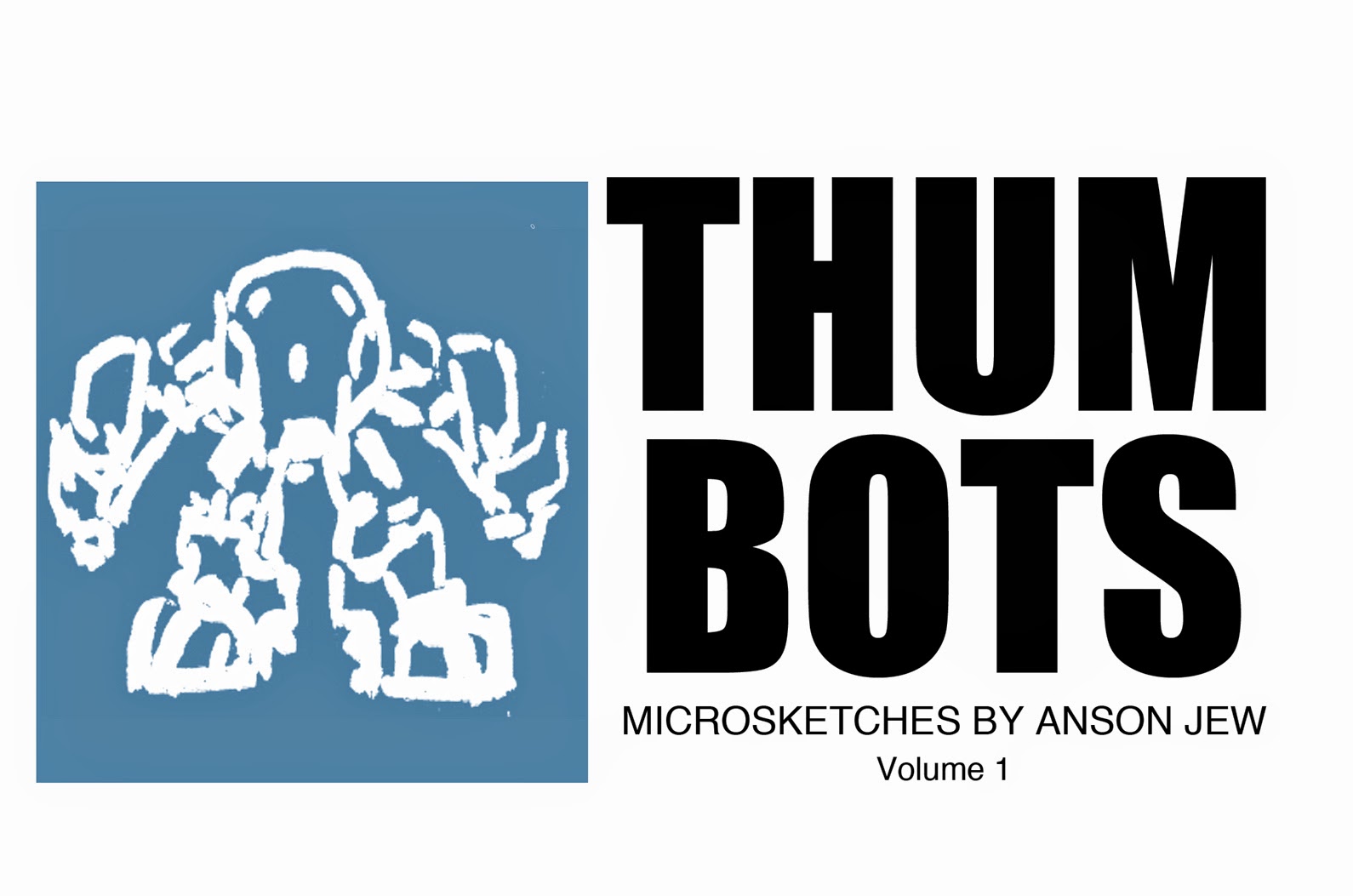 I'll have most of my regular items for sale and will be doing sketch commissions.  Come on by and say hello!  Look for this banner:

The Secret of Life 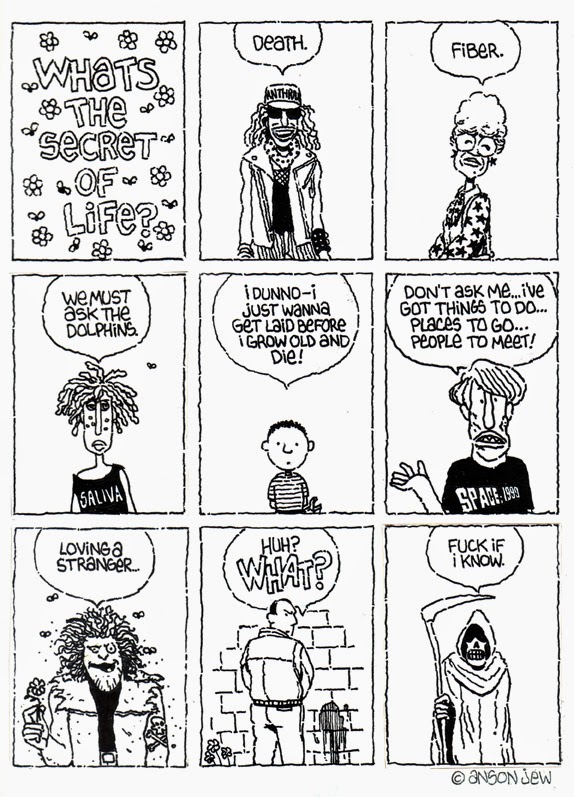 Way back in the stone age (the late 1980's), I was out of school and just starting out, looking for some way to break into the big time illustration/cartooning world.  I was sharing an old Victorian with four other roommates in downtown Sacramento and working as a graphic designer for a magazine aimed at horse riders and breeders, and freelancing on the side.

One of my roommates, Larry, was also an aspiring cartoonist (we would both end up working in the games industry at LucasArts Entertainment) and in an effort to inspire/motivate ourselves to come up with cartoons, we used to have a little weekly competition: draw up a cartoon and bring it to the local pub (The Rubicon Brewing Company in this case, just around the corner from the house)-- show up empty handed and you buy the drinks.  If you both have a cartoon, the waitress chooses the best cartoon, the loser buys.

Here's one of the first cartoons I came up with.  I eventually sent it around and was amazed when I got a message relayed to me at work that National Lampoon Magazine wanted to run the cartoon!  This was the first time I had done any work that would be seen outside of the local area, with most of my previous work mostly being local Sacramento businesses and ad agencies.

The cartoon editor, Sam Gross, encouraged me to keep drawing cartoons and submitting and I did, but nothing I sent him seemed to have what he was looking for (a couple of these unused strips would later show up in my self-published comic book "Saturday Nite" years later).  He said none of the strips I sent had that "something" that this strip had.  It took a while for the strip to finally appear in the magazine, but it eventually showed up in the June 1990 issue.  The magazine went under a few years later. 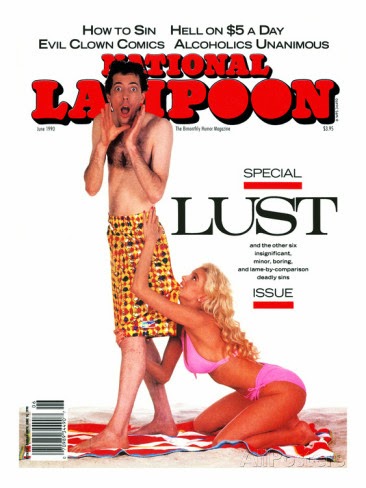 I cant believe it!  It's been more than a year since it's release, and though I've made mention of it before, I've never made an "official" blog post about the release of my book Professional Storyboarding: Rules of Thumb, published by Focal Press (a leading publisher of instructional manuals dealing with art and technology).

It is co-authored by Sergio Paez, a storyboard artist who has worked on shows like Clone Wars, and runs the online storyboard community StoryboardArt.org .  He brings his own perspective to the book with years of experience working and teaching in the San Francisco Bay Area. 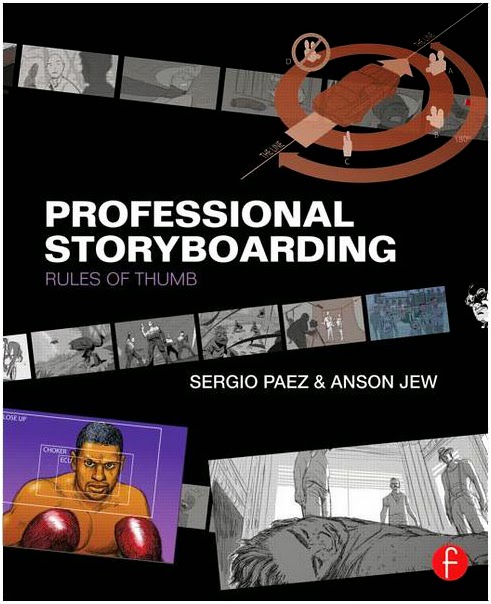 The book was intended to be a realistic guide to working in the storyboard industry, warts and all.  Aside from covering what you'd expect in a storyboard book --like composition and film grammar, the intention was also to address the differences in the many kinds of storyboarding there are, since "storyboarding" is kind of a blanket term that is used to describe several different jobs that serve very different purposes (depending on the audience --which can be anything from an animator in a foreign country to an account executive to a film crew).  The book features interviews from working storyboard artists (Benton Jew, Josh Sheppard, Sherm Cohen, Jeff Zugale) to get a no-holds barred look at what working in this industry is really like.

The book is available at Focal Press, Amazon, Barnes & Noble and other fine establishments!

As mentioned before, I'll be part of a panel presented by the Society of Illustrators of Los Angeles.  I'll be bringing along some samples of my work in the form of storyboard-to-film-comparison clips.  Here's a taste:


I'll be slowly releasing these videos right here on my blog over the course of several weeks.  Keep an eye open!

It's been a very busy year!  Lots of cool projects I've been working on I wish I could tell you about, but one of the things about being a storyboard artist is that you can't always talk about what you're working on until a few years later when the project is done! 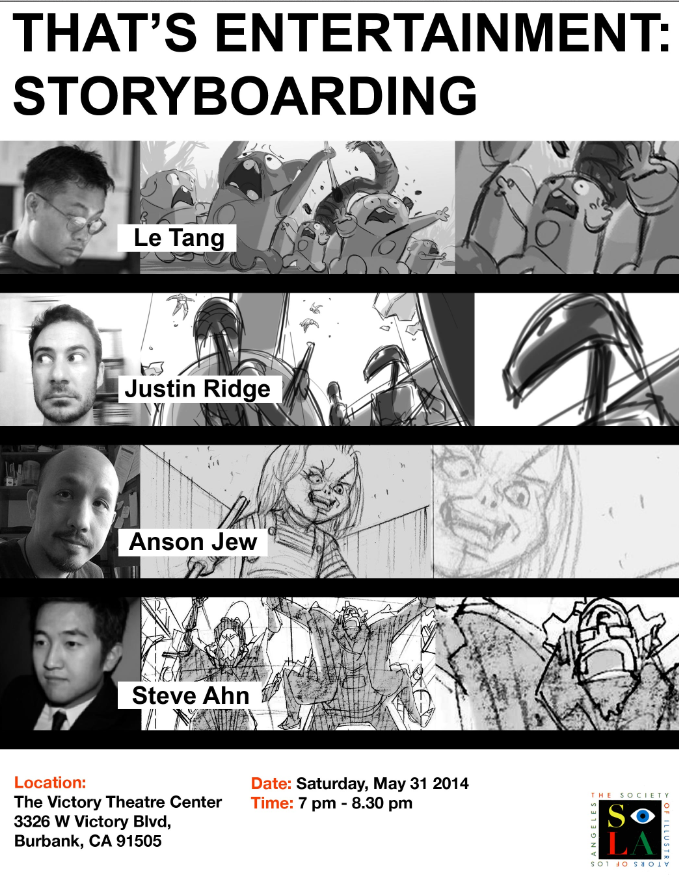 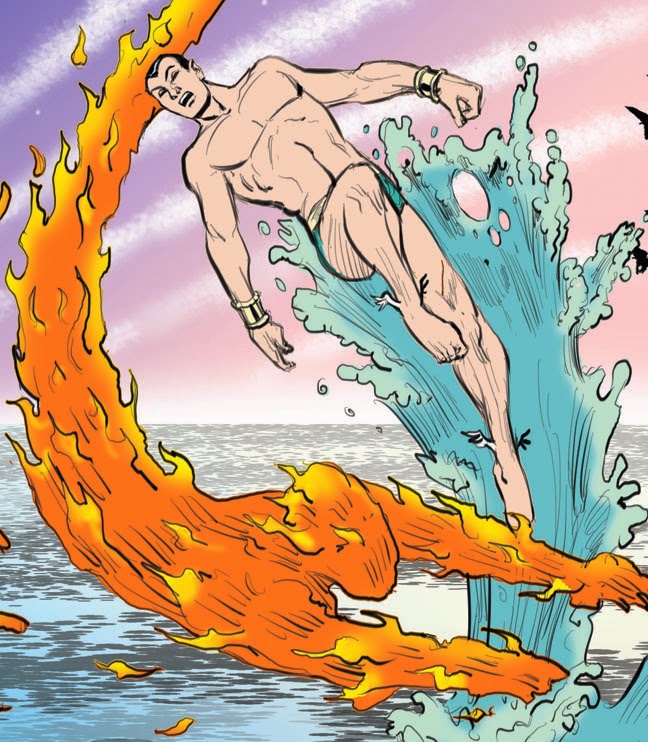 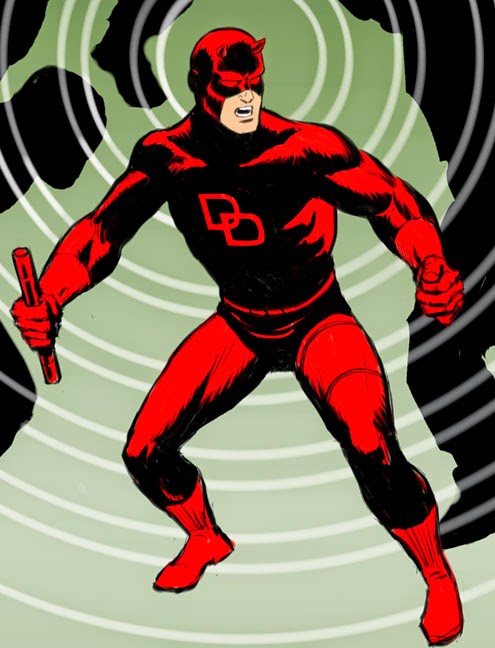 This is my art submission celebrating the 20th anniversary of Hellboy for Comic Con 2014. This is a cropped version of the art-- the full design (if chosen) will appear in the Comic Con 2014 Souvenir Book. 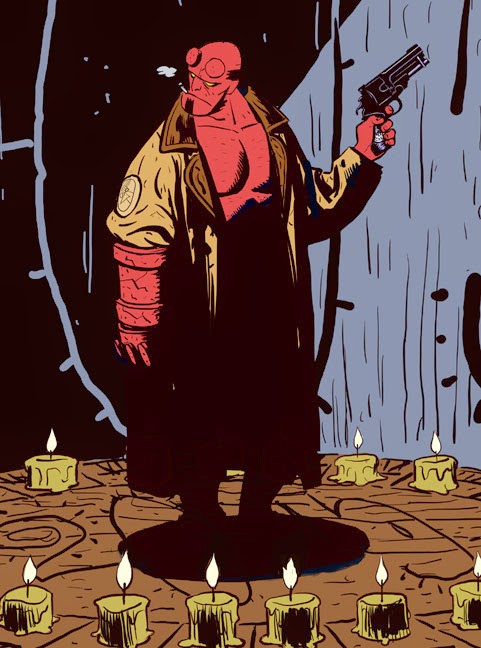 Sometimes you look at some old artwork you did, and you think back to the clear idea you had intended, and then see the final product you were able to produce at the time.  Sometimes the gap
between the two versions can get to you.  Such was the case with this piece.  So I dug out the old piece
and added a little extra texcha.  This is really much closer to what I had in mind when I had originally
done the piece five years ago. 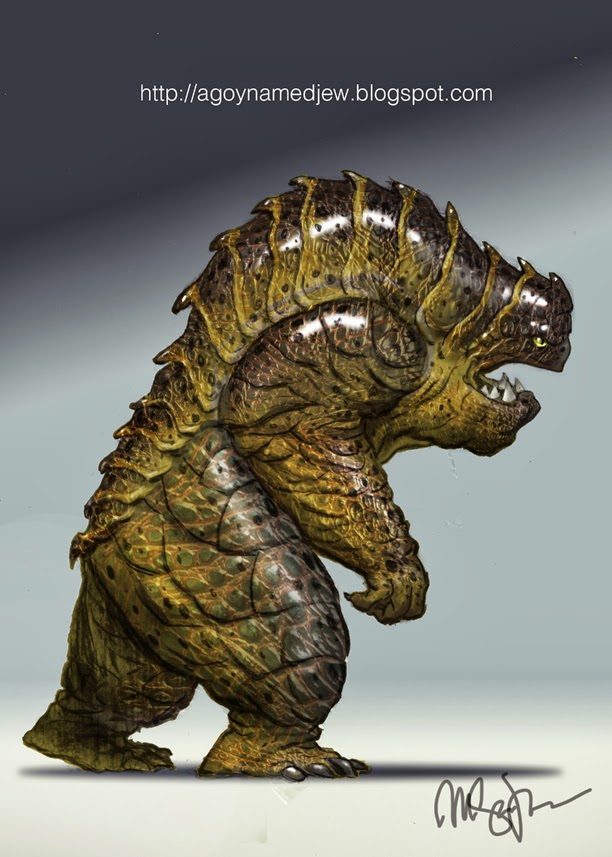 Of 'Bots and Bunnies 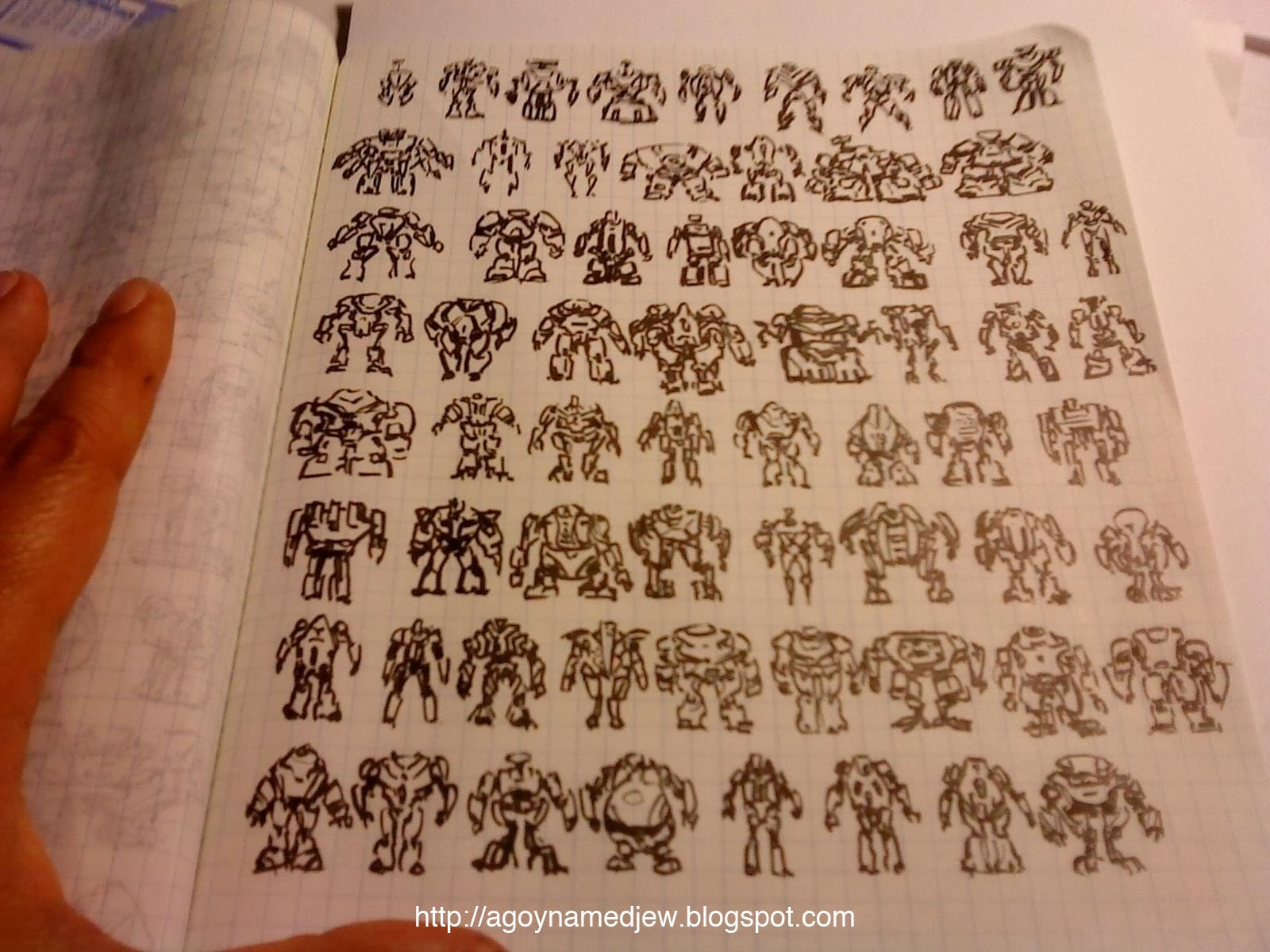 I've been spending a bit of my extra time drawing robot sketches.  These were done in preparation for a book project I hope to have ready by Comic Con.  More later. 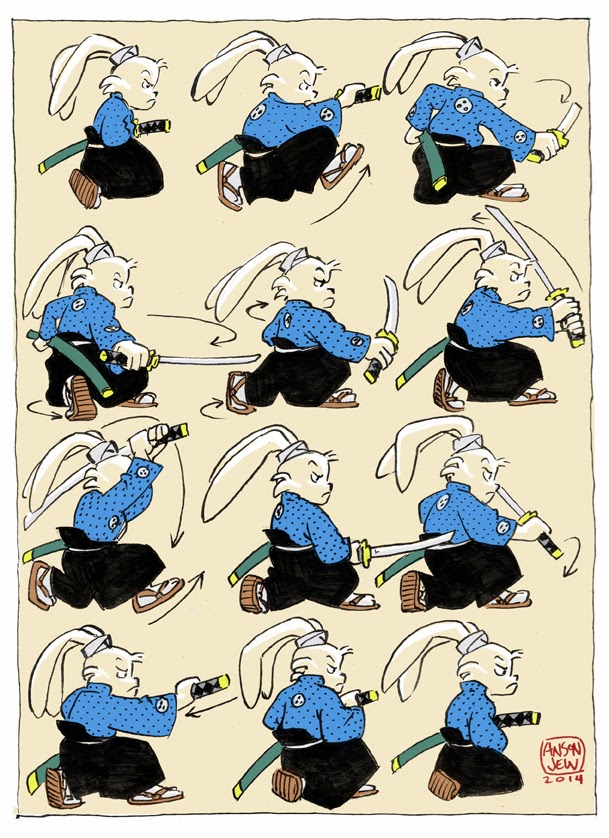 For you comics fans, here's a little drawing I did for for the Stan and Sharon Sakai Benefit Auction.  Stan Sakai, the creator of the comic book Usagi Yojimbo, has had some very tough times recently.  His wife recently acquired a rare debilitating disease.  After an extended stay in the hospital, she is home, but requires 24-hour care.  The cost of the care is more than the Sakai's insurance covers, so The Cartoon Art Professional Society is putting on an  auction to help raise money to offset some of the Sakai's ongoing medical expenses.  Donations can be made here, and the first in a series of benefit auctions will be held beginning March 5 via Ebay under the name "CAPSauction".
Posted by Anson Jew at 9:12 PM No comments: