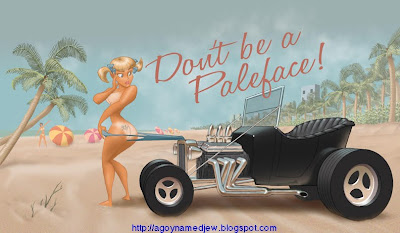 Well, it's that time of year again! This year, Comic-Con will be laid out a little differently, with Artists' Alley moved to the left side of the floor. I will be at table DD24 next to my brother Benton, who will be at DD23. Come by and say hello!

This year I will be focusing a little more on digital mini-prints. I have a new image, "New Dog, Old Trick", that will be available at Comic-Con as a 11" x 17" mini-print. Which isn't so mini except that the image will later will be made available as a giclee in all it's full 13" x 22" glory at the 3rd Annual Garter Belts and Gasoline Show taking place at the Alternative Cafe in Seaside CA. The opening will be on Friday, August 13, from 7pm-9pm. The Alternative Cafe is at 1230 Fremont Blvd., Seaside CA 93955-5734.

Here's a detailed look at the art:

Email me at ansonj@sbcglobal for more information about my prints and other stuff I have for sale.
Posted by Anson Jew at 11:45 AM 6 comments:

My portfolio site was way overdue for a revamp. Check it out at http://ansonart.tripod.com

Let me know if you have any comments or bugs or dead links to report.

Anson
Posted by Anson Jew at 8:16 PM No comments: 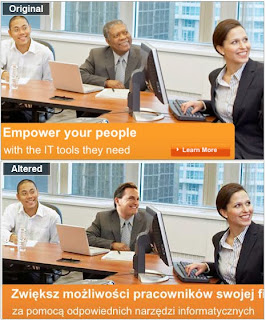 In August of 2009, a story surfaced about a Microsoft advertisement in which a photo of businesspeople of various ethnicities and genders was altered. The head of a black man was replaced with that of a white man. Microsoft later apologized for the incident.

In August of 2009, a story came to light about Larry Whitten, a hotel owner in Taos, New Mexico, who ordered his Hispanic employees to Anglicize their first names. The name Marcos, for example, had to be changed to Mark. The employees were also forbidden from speaking Spanish in his presence.

In June of 2010, a Prescott, Arizona principal decided to lighten the skin of black and hispanic students depicted on a mural at Miller Valley Elementary School following prodding by Prescott city councilman Steve Blair. Blair stated on his radio show that showing people of color on a mural in Prescott constituted some kind of "agenda." Some of the residents of Prescott drove by and screamed racial slurs at the mural. Fortunately the decision was reversed following an outpouring of criticism from people across the country. 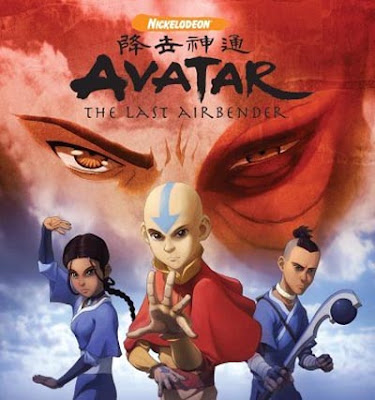 Even before filming began of his live-action adaptation of Avatar: The Last Airbender, M. Night Shyamalan was informed of the racial insensitivity of casting Caucasian actors for all the lead roles, even though the source material--a popular American anime style cartoon-- clearly takes place in a fictional version of ancient Asia (everyone eats with chopsticks, the writing, costumes and architecture are authentically ancient Asian in style). Unfortunately, Shyamalan failed to rethink his his whitewashed casting (other than making one of the antagonists in the story an Indian when the originally cast white actor dropped out). On July 1, 2010, Shyamalan's The Last Airbender opened in theaters across the US. In Los Angeles and Seattle people of all ethnic backgrounds came out to protest Shyamalan's poor casting decisions.

This type of thing follows a long tradition of whitewashed casting in Hollywood in which roles that were clearly most appropriate for actors of color are given to white actors or are changed to accommodate white actors. John Wayne played Genghis Khan in 1956. Brian Dennehy played Kublai Khan in 2007. Mickey Rourke will play Genghis Khan in John Millius' upcoming film. No live action film depiction of Charlie Chan has ever featured an Asian actor in the many incarnations of the role throughout it's history. The same is true of Fu Manchu. The list for this type of thing goes on throughout film history and lasts even to this day. 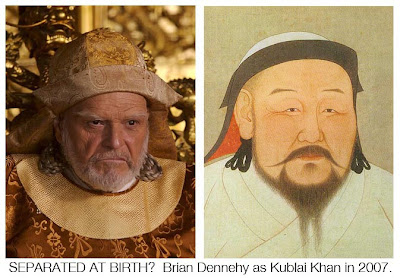 Ask any actor of color or his or her agent: go for a role written for a white actor in a substantial role and more often than not, the result will be "No, thanks" but there's a role for you--"third tourist from the left."

It is sad, that in Los Angeles, a town that is about 10.4% Asian, less than 2% of roles go to Asians. In fact, Hollywood's record with people of color is pretty dismal. Paramount, for example, the studio making Airbender, is giving 89% of it's lead roles in the next decade to white actors, 94% of which will be males.

Now it's not hard to find people who will sympathize with you about the lack of good roles in Hollywood for Asians and other people of color.

The problem is, it's not true. There are plenty of good roles for people of color in this town.

Hollywood has just given those roles to white people.

Please don't allow your money to support these kind of bigoted hiring practices.


More on this topic:

My brother Benton makes some very solid arguments on this subject.


And if none of this is enough to stop you from seeing the movie, watch this.
Posted by Anson Jew at 5:13 PM 9 comments: